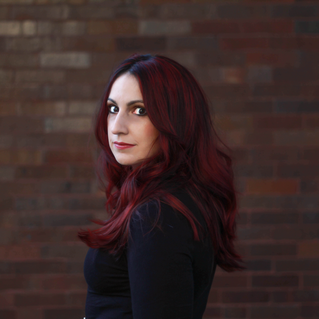 I write for my younger self:
My childhood.
My adolescence.
All the heightened teenaged anxiety and gross/beautiful puberty driven moments.
I write for my mom:
Her dreams.
Her past.
Who she was, who she is, who she will become.
I write for middle class women:
Working class women.
Minimum wage women.
Working paycheck-to-paycheck only to wake up and do it all over again.
I write for anyone who is considered “the other” by society. I might not have lived their specific experiences but I can write to:
Believe.
Include.
Listen.
I write for women because sometimes being a woman can be the loneliest experience of your life.
My plays seek to answer the question, “How do you build a woman?” Prompted by Simone de Beauvoir and her statement, “One is not born, but rather, becomes a woman,” I look inside of my body and see my heart, guts, and blood. These are my writing tools. I have difficulty separating my writing from my womanhood. With every social injustice against my identity that is smeared across headlines, I feel the anger inside of me explode releasing my heart, guts, and blood to drown the pages of what will become my next play.

My plays explore the many facets of my identity and raise awareness to social issues. I find myself exploring middle class America, matriarchies, privilege, gender roles, and how women contribute to the legacies of their families. The question, “What does it mean to be a woman,” propels my characters on their journeys. My womanhood, experiences, happiness, anger, desires, vulnerabilities, and dreams are tangled together in these knots of words I call my plays.

I once read somewhere that anger is just sadness wearing a disguise. I agree with this statement and would like to also add loneliness and confusion. I think back to when I was a young girl experiencing a traumatic event. I would think to myself that I am the only person in the world experiencing this moment. No one understands me. No one will hear me.

As a theatre artist, I think about my younger self often in her moments of ultimate loneliness and I wish I could tell her that she was never alone. My plays are a way of screaming into a dark void wanting to hear more than just my echo. As I write, I take my sadness, confusion, and loneliness all wrapped up in this angry pain and shout my truth. I hope that when people hear my plays, even if it is just one person who feels lost, standing in their dark void, they will know they are not alone. 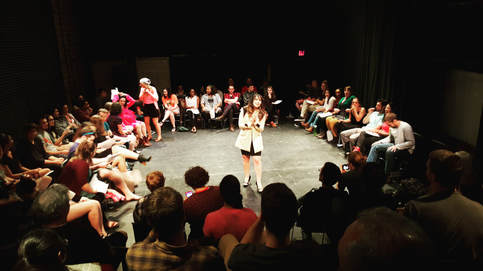 I was born and raised in Chicago. I write plays that raise awareness to social issues while exploring the many facets of my identity. Specifically, much of my writing explores middle class America, matriarchies, privilege, legacy, and gender roles.

My full-length play, The Forgotten Language of the Handshake, was featured in Landing Theatre’s New American Voices play festival in Houston, TX and was a semi-finalist for the Bay Area Playwrights Festival. 28 Light Years From Now, was the winner of 2020 Getchell New Play Award, semi-finalist for the Premiere Stages at Kean University, and semi-finalist for the Bay Area Playwrights Festival 2020. My full-length play Tight End has been featured with the National New Play Network (NNPN) for their MFA Playwrights' Festival at the Kennedy Center in July of 2016 Tight End was also a Top 20 Finalist for CulturalDC’s Source Theatre Festival in 2017, and received Honorable Mention for the Jane Chambers 2017 Student Playwriting Award. Tight End received its world premiere production with 20% Theatre Company Chicago and its regional premiere with Majestic Repertory Theatre in Las Vegas, NV in 2019. Relative Theatrics in Laramie, WY produced a virtual, streaming production in 2021. My full-length play, Rev, was the runner-up for the Todd McNerney 2018 Playwriting Award, the winner of the 2019  SETC/Stage Rights Ready to Publish Award and is now available for purchase on Amazon.  My other plays have been produced and featured in festivals across the United States. I am a playwriting alumna with NNPN and member of the Dramatists Guild.

I graduated from the MFA Ohio University Playwriting program  where I was the recipient of the Trisolini Graduate School Fellowship for my play The Big Fuckin' Giant.  I received my BFA in Playwriting and minor in Journalism from The Theatre School of DePaul University.  After graduating from DePaul, I worked with various theatre companies around Chicago including 20% Theatre Company as their Literary Manager. In addition, I worked with Piccolo Theatre and The Neo-Futurists in marketing, stage management, and different areas of design.

I will continue to unlearn the racism that has been ingrained my mind and fight against the system that has been created to my benefit by educating myself, admitting fault, and using my privilege to the best of my abilities to make space for more BIPOC voices, stories, and representation. The day I stop being willing to listen, learn, and change, is the day I stop being an artist.